A critical history of the two degree idea

The idea that human induced climate change is a phenomenon with a single, global dangerous limit is the 'once upon a time' and 'happy ever after' part of the climate change story, an 'end point target which defines the policy debate' (Anderson and Bows, 2008). All the "green" initiatives, all the solar panels, the push to get everyone driving electric cars, low energy light bulbs, wind turbines. It's all designed to try and prevent the world warming by an average of two degrees centigrade above the long term pre-industrial average, whilst preserving the conditions necessary for capital accumulation. The official publications from the UK government and the European Union say it is necessary to prevent the world warming by more than two degrees in order to avoid dangerous climate change.
The purpose of this website is to offer a critical analysis of

Part 2 of this analysis will examine how German institutions got the two degree idea onto the policy table, starting in the early 1990's. 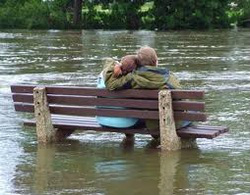 The EU and UK have been at the forefront of framing international mitigation agreements around the need to avoid warming the world by more than two degrees centigrade. The German Advisory Council on Global Change (WGBU) produced three reports at the behest of the German government. The reports came out in 1995, 1997 and 2003. These reports are widely cited as key markers in the two degree story. In a recent paper reconfirming the need to avoid two degrees of warming, two of the key authors of those reports admitted that they, ‘sometimes inadvertently, sometimes consciously’ introduced the concept into policy debates (Jaeger and Jaeger, 2010: 25). The authors go on to argue that it was these reports, and the efforts of the WBGU’s chairman, Joachim Schellenhuber, which convinced Angela Merkel to push for the two degree target at international conferences, triggering ‘the political process that fifteen years later led to the global visibility conferred to the 2° target by the G8, the Major Economies Forum, and the Conference of the Parties held in 2010 in Copenhagen’ (2010: 7). All three reports confirmed the commitment to the two degree limit though the first report used a different reasoning. To avoid dangerous climate change, the report argued, the warming should be limited so that we can be assured of the ‘preservation of Creation in its current form’ (WBGU, 1995: 13). This has been described as a ‘peculiar’ goal for a secular government to support (Tol, 2007: 246). More contentious is the claim that dangerous change can be avoided by not warming the Earth by more than 0.5 degrees centigrade over the highest levels of warming during the last interglacial. This baseline, with the additional 0.5, gives the two degree limit (WBGU, 1995: 7). This limit, through different reasoning, was reconfirmed in the two subsequent reports.

Part 3 of this story will provide a timeline of how the two degree dangerous limit claim made it from these reports to be the measure by which, according to the world's leaders at the Copenhagen Summit in 2009, the world will be saved.

WBGU, (1995), Scenario for the derivation of global CO2 reduction targets and implementation strategies. Statement on the occasion of the First Conference of the Parties to the Framework Convention on Climate Change in Berlin,

WBGU, (1997), Targets for Climate Protection, 1997. A Study for the Third Conference of the Parties to the Framework Convention on Climate Change in Kyoto.

WBGU, (2003), Climate Protection Strategies for the 21st Century. Kyoto and Beyond. 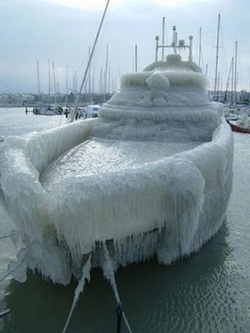 The headline above comes from a story in the Independent newspaper, published in the lead up to the Copenhagen Conference in 2010 (The Independent, December 1st 2009). One outcome of the Copenhagen conference was an Accord released by the UN, which called for climate policies to reflect 'the scientific view that the increase in global temperature should be below 2 degrees Celsius' (UNFCCC, 2010).

I will outline below some of the key stages in the policy journey, from behind the scenes whispers in German and European Commission conference rooms through to the Copenhagen Accord, when the diverse hopes, fears and aspirations of 7 billion people were cast aside by powerful Western institutions, to be supplanted by a single 'avoid two degrees of warming and everything will be great' grand vision.

1996 - The 1939th European Council meeting  announced 'The Council believes that global average temperatures should not exceed 2 degrees above pre-industrial level’. That the Council 'believes', rather than knows, shows that defining two degrees as dangerous is a choice, not scientific fact.

2001 - The IPCC Third Assessment Report confirmed that attempts to define dangerous climate change as beyond its legal remit (Dokken, Nogue, van der Linden, Johnson and Pan, 2001). In the same year George W. Bush used the non-existence of a knowable dangerous limit as reason for increasing atmospheric concentrations of CO2 'No one can say with any certainty what constitutes a dangerous level of warming, and therefore what level must be avoided’.

2005 - Tony Blair called a conference, Defining Dangerous Climate Change at Exeter University in order to confirm what should count as a dangerous limit to climate change. There was no definitive agreed statement confirming the two degree limit. Hansen is quoted as saying ‘The two degree scenario cannot be recommended as a responsible target, as it almost surely takes us well into the realm of dangerous anthropogenic interference with the climate system’. The Council of the European Union again calls for keeping warming below two degrees.

2007 - The head of the IPCC, Rajendra Pachauri, is quoted in a Reuters news report as saying 'People are actually questioning if the 2 degrees Centigrade benchmark that has been set is safe enough’. Holdren, President of the American Association for the Advancement of Science says 'I think that 2 degrees is rather arbitrary. It’s not clear to me that the answer shouldn't be three degrees, or more, or less. We don't have a scientific basis for selecting the two degree number - it's a hunch, a guess'. IPCC 4th Assessment report. Contribution of Working Group III '‘Defining what is dangerous anthropogenic interference with the climate system and, consequently, the limits to be set for policy purposes are complex tasks that can only be partially based on science, as such definitions inherently involve normative judgements’ (97). The right wing UK Conservative Party 'Quality of Life Commission' releases report titled 'Don’t give up on two degrees’.

2008 - Sir Bob Hoskins, a member of the government's Committee on Climate Change, speaking at a conference in Exeter, England, on identifying dangerous rates of climate change, confirmed, regarding the idea of dangerous thresholds in the climate system 'They may be local thresholds or they might be more global ones, but we certainly don’t know when they are going to occur so how do we build that in to our thinking?'.

2009 - The Chair of the G8 announces 'We recognize the scientific view that the increase in global average temperature above pre - industrial levels ought not to exceed 2 degrees C’ (G8, leader’s declaration). The Major Economies Forum on Energy and Climate Forum was formed, and confirmed its backing for the two degree limit. 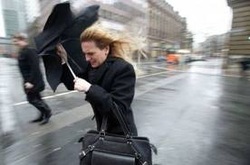 In 2008 the chair of the UK government's Committee on Climate Change, Lord Turner, when being questioned by the now defunct Environmental Audit Committee, admitted "I don't think we can stop 2 degrees these days" (The Guardian, December 17th 2008). The transcript of that session reveals worrying implications about defining climate change as a problem with a two degree limit, namely that it will not be possible to stop at two degrees of warming.

Turner was asked by one of the panel:
'I am getting a little nervous about this balance between 2° and 4° in your assumptions...is  the thing that will increase the risk of going to 4° .. actually going to 2°? Therefore, you cannot actually separate the two in the way that you seem to be doing'. Turner rejected this interpretation but then went on to say 'You are absolutely right to identify that one of the things you have to be very aware of-that the process of going to 2° or 3° in itself produces feedback loops which increase the chance of going to a higher level'. (Environmental Audit Committee transcript, February 2009).

So, even if atmospheric concentrations of CO2 were stabilized at 450ppm, (a figure which policy makers have assumed is equivalent to two degrees of warming)  there is a real chance that this will set in train a process which inevitably leads to four degrees of warming. Perhaps in recognition of the utter failure of the two degree framework to achieve it's own eponymous goals, later that year a conference was held in Oxford, titled 4 degrees and beyond: Implications of a global climate change of 4 degrees + for people, ecosystems, and the earth-system. The debate was no longer about limiting warming to two degrees, but trying to survive four degrees. A special issue of the Philosophical Transactions of the Royal Society included a paper estimating 4 degrees of warming by 2070 under fossil intensive scenarios (Betts et al 2010). Whilst I believe sea level rises are the least of our worries, 4 degrees of warming Lynas argues, means we can expect  sea level rises of 25 metres above 2 degrees of warming (2008: 166), and end to agriculture in most of Australia, China and India (2008: 173). And if it is not possible to stop 2 degrees turning into four degrees, how do we stop at 4 degrees?

Two degrees of warming is very far from safe; it is an incredibly risky strategy, and one that looks like it has failed.

Part 5 - The insanity of continuing with a failed 'dangerous limits' discourse. 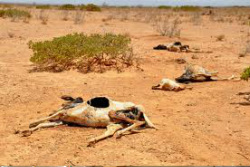 The oft quoted quip attributed to Einstein, that the definition of insanity is to keep doing the same thing, even after it has failed, seems particularly apposite for the 'dangerous limits' framing of climate policy. Though the evidence mounts that dangerous climate change has already begun, and that it will not be possible to limit warming to two degrees, the two degree dangerous limit concept is as dominant in progressive and policy voices on climate change policy as it was 5 years ago. The debate remains one about whether or not it is possible to avoid two degrees, all hands to the deck because we are running out of time to avoid two degrees. If ever there was proof of the inadequacy of the 'rational man' idea, the fixation on the two degree mirage is surely it. The sane response at this stage would be a full socialization of the problem. An admission from policy makers and their advisers that we and they do not know what we and they are doing, nor do we or they know what to do, and we are in very deep trouble. An immediate abolition of the corporate lies which define our culture alongside a massive redistribution of resources on an equal basis across the globe so people have the time to start working at a community level on how to survive, adapt and live in the new world that is now here. An end to top down policy making which has at it's core the interests of a rich and powerful, but tiny, elite. A trust in people to come up with the right answers, given the 'ideal speech situation' promoted by Habermas. They won't come up with the answers policy makers want to hear, but the answers policy makers have given to climate change have proven themselves worthless, an insult to democracy and the conditions necessary for maximising human flourishing.